to get a "real" manicure

For those that know me I am sure this will come as a shock. I'm a bit of a nail painting fiend. I have had to go off polish for a month on more than one occasion - heck, I think I've had to give it up for Lent once or twice. I really like painting my nails. I hate doing dishes because the water wrecks my nails (both the polish and my nails). I don't play certain sports because I like to have pretty nails.

In all the years of polishing, it has always been a home-job. Until my recent vacation to SoCal. And like many experiences that we think are going to be shiny and new, it did not live up to the expectations that I had.

One of my biggest frustrations about going on vacation is that I can't justify bringing a big bottle of nail polish remover (they won't let me pack it in my carry on) and I hate chips in my polish, and as soon as my polish chips it all must come off. I don't chew my nails but I am certain you will have seen me at some point chewing the polish off my nails. I become relentless in my pursuit to remove chipped nail polish.

I painted my nails beautifully before our trip, but time simply doesn't allow for polish to last forever on my nails. I know, Gel-ish, Shellack, acrylics, those are all fine options, but I like to change the colour of my nails too often. I don't know if I could handle having the same colour for up to three weeks. Plus, I've heard that those are even worse treatments than the very drying polish regimen of acetone and chemical enamel.

I painted them all pretty in a light lilac colour that would match all of my outfits. And then it chipped. But it was ok because we were going to a spa that day for a massage and I'm not afraid to ask for remover. I think their remover was pure acetone. My nails turned white and looked like they had been baked in a dessert sun for weeks. It stripped anything and everything off of my nail. This is a good thing, I guess.

When we got back to our bed and breakfast I resisted the urge to paint my nails. Only because I didn't have remover and we weren't halfway through the trip yet. Covering chips with little blots of polish is ok, but I hate the way it looks. I love a glossy complete nail. There is something so satisfying about the uniform gloss of a fresh manicure. Any moment that there was downtime my mind would go directly to the little bottle of lilac polish that I had brought with me. But I would convince myself out of it. Knowing that I didn't have access to remover again until I would get home.

We moved from the bed and breakfast to a condo in a hipster gay-bourhood. And there were nail salons on every corner. The flashing sign of $8 manicures loured my eyes at every pass. Finally I said to myself, you've wanted to do this since New York (I dragged my poor husband all around Manhattan on our first anniversary looking for a cheap nail salon, I felt so defeated when I didn't find one) and if you don't do it now you'll be thinking all about how you wanted to try this so badly. It's a bit strange how much I had built this up in my head.

I was told in broken English to pick a colour. This is where I usually make a mistake in previous pedicure experiences. I often choose the wrong colour and end up hating it. I knew that I wanted a pale-pink-almost-white, I was in California after all. I found an expensive brand in the colour that I was thinking of, it looked a little goopy but I thought, if it's on the wall they'll use it.

I sat down, gave her my hands and she set to work. She removed my cuticles (which I have always been taught not to do), she took a large metal scraper and scraped my already thin nail beds (metal, another no no). The guck that came up nearly made me gag. I'm sure it was just layers of previous base coats there to protect my nails. She soaked my hands, making my nails even softer than they already are. And then she took out a buffer, I thought, ok, I've buffed my nails before no big deal, and then I saw the coarse side. My hand twitched impulsively. She scratched the crap out of each already thin, dry nail.

Then she asked me to pay. I had never done this before so I was shocked, "Are you done already?"!

But then it made sense that I had to pay before actually painting the nail so that I didn't wreck the polish. I paid, she began the polish process. I have never combined brands. If my base coat is one brand the rest of the polish regimen has to follow suit. She pulled some nondescript bottle out of her pocket and laid down the clear coat. I often try to watch any service I am receiving so I can replicate it at home. But she painted my nails in such a foreign way. She patch-worked it on. She showed me the first nail for my approval. I hated it. The polish was goopy and the colour splotchy. I think she was hoping I would say, that's awful let's pick another colour but I had already taken an agonizingly long time to select that colour and didn't want to return to that process. I forged ahead.

She finished with the painting and then pulled out yet another nondescript bottle. This time the top coat. I thought that this would be where the nail would all come together. And it sort of did. It evened out the splotches quite a bit. I was happy --- enough.

About ten steps out the door I looked down and one of my nails had a dent in it. I was so annoyed. I don't know what I hit it against and I did a few things to try to smooth it out but the top coat had cemented the dent in place. I'd have to wait three days to be home and take the polish off my nails.

It's been over a month since that happened, and the scratches from the buffer are still in my nail beds. I see them every time I put a clear coat on. I have had to cut my nails down to the quick every week because they are flaking and peeling because of the buffer scratches.

With all of these complaints, the way that she painted my nails still looked more professional than I have ever achieved at home. And it was only $8, you get what you pay for.

Now, if you'll excuse me, I am going to paint my nails. 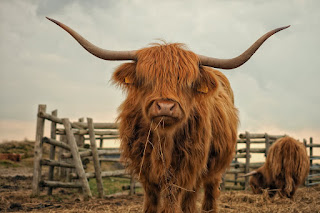 to own my *bleep bleep*